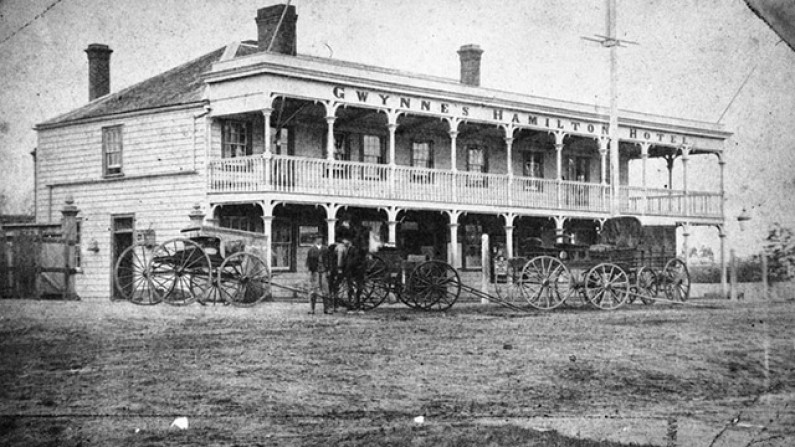 The first Hamilton Hotel, was opened in March of 1865 by Captain W.E. Turner, formerly a commander of the colonial paddle steamer, the PS Rangiriri. Although not granted his license to operate till the 7th of March, Captain Turner was obviously confident as he started advertising his new hotel as early as the 2nd of March 1865. In December of 1867 Turner put the hotel up for sale and the following February it was purchased by a Mr Joseph Pennington. Mr Pennington later sold the property to Mr Thomas Farrell. The hotel became the venue for various meetings of the settlers including those of the Hamilton Highway Board, the Waikato Jockey Club and the shareholders of the Hamilton Flour Mill Company (Limited). The hotel changed hands once again in May of 1872 when it was purchased by James Harper. Harper added a billiard room and an extra 25 bedrooms. Two years later Harper was charged with being in breach of the Licensing Act for allowing beer to be sold and consumed on a Sunday. The following month there was a destructive fire in the town centre. James Harper was most active in saving property, and hospitable to those rendered homeless, although he retained a less than stellar reputation.

The hotel’s reputation improved considerably after its operation was taken over late in 1874 by Mr Richard Gwynne and his wife Sarah (formerly of the Junction Hotel in Newmarket, Auckland). The hotel became the centre of Hamilton life, whenever there was a public function in Hamilton, the Gwynnes were there. The Gwynnes made several additions to the hotel including another 14 bedrooms, a large commercial room, a dining room and several sitting rooms. As well as being a hotel owner and on of Hamilton Borough’s first councillors, Mr Richard Gwynne was an enthusiastic gardener who laid out and kept the grounds in admirable style until his premature death in 1883.

Sarah continued to run the hotel for many years and continued to be actively involved in the local community until she retired in 1897. After her death in 1906, Mrs Gwynne was described in The Observer as; “an incomparable hostess...one of the model landladies of the province and a woman of uncommon kindliness, geniality, and force of character.”

Following Sarah Gwynne’s retirement, the hotel was taken over by William Bright and his wife Agnes, formerly proprietors of the Queen’s Hotel in Thames. The Brights were in charge less than a year when fire broke out across the street. Because there was no fire brigade in Hamilton at this time, the damage was extensive with fifteen buildings destroyed, including the first Hamilton Hotel, along with its stables and honeymoon cottage.

The new Hamilton Hotel was opened on the 4th of March 1899 under the ownership of L.D. Nathan Co. It had fifty rooms, a frontage of 81 feet, and extended back in two wings a distance of 68 feet. The Waikato Argus described it as brilliantly lighted, look[ing] exceedingly well and had the effect of brightening up that portion of the street considerably.  It became the headquarters of the newly formed Hamilton Club until they opened their own premises on Grantham Street. 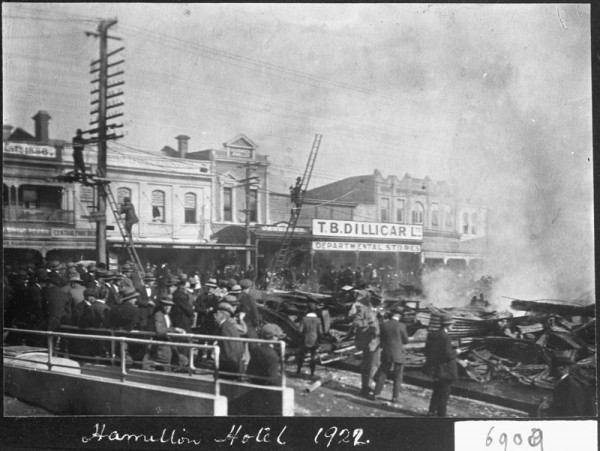 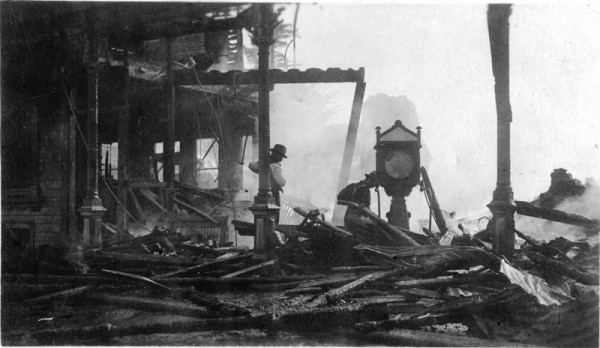 A second fire hit the hotel in 1922, the licensee was former All Black Jock McKenzie  The fire on the 3rd of April destroyed the second Hamilton Hotel and took three lives. They were Donald Moore, a travelling salesman for Chemicals Ltd., Nellie Partridge (nee Wood) who was a maid at the hotel, and artist Horace Moore-Jones, who initially escaped the fire but returned to save the lives of others. He died in hospital as a result of the severe burns he suffered. Horace Moore-Jones was well known particularly for his work Simpson and his Donkey. He was in Hamilton because he had decided to start art classes in the town and was boarding at the Hotel.

Twelve months later a new Hamilton Hotel opened. Made from concrete and concrete block, its style is described as Beaux Arts and is the only one of its kind in Hamilton. Various Governor Generals stayed at the hotel as did Prime Minister Coates, but the most famous guests of all were in 1953 when the Queen and Prince Phillip stayed a night during their Coronation tour. 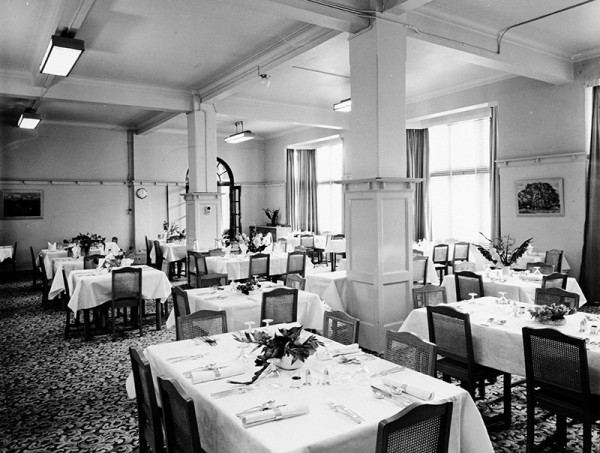 The golden years did not last and in 1980 the hotel closed for the last time. In 1981 the hotel building was sold to charitable company Hamilton Arts Centre Ltd who developed it as an arts and community centre which became commonly known as Left Bank. In 1985 it was listed as a Category 2 historic building. 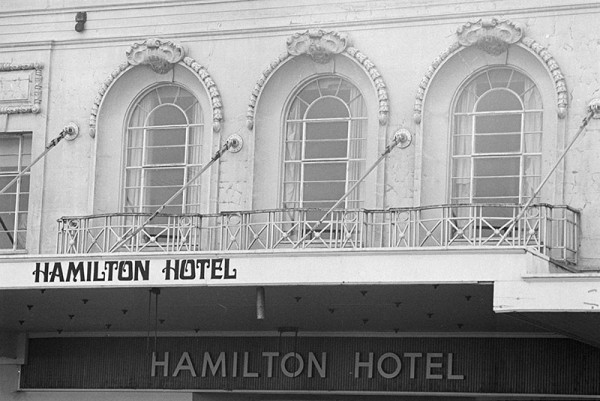